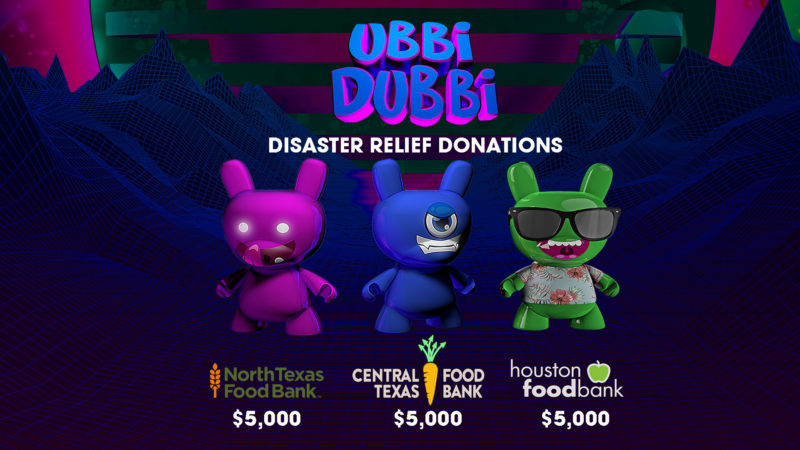 Despite the economic impact of COVID-19, Ubbi Dubbi Festival producers Disco Donnie Presents (DDP) announced this week the company has donated $15,000 to three Texas Food Banks in the wake of the Texas ice storm, which has left many Texas families in need of food, shelter, and other necessities. Three food banks will receive $5,000 each, which include Houston Food Bank (Houston), North Texas Food Bank (Dallas), and Central Texas Food Bank (Austin). The funds will be shared as gifts from each of the festival characters, Ubbi, Dubbi, and Tubbi. The donation equates to approximately 7,500 meals for those in need. Nearly 1/3 of DDP’s staff was affected by the ice storm, so the challenges faced by Texans hit close to home.

DDP has long donated to charitable causes and philanthropic organizations. A full list of their charitable partners can be found at the Disco Donnie Presents website. Most recently, as a thank you for supporting the sold-out debut of the Ubbi Dubbi Festival, DDP also donated $15,000 to three separate regional Texas charities: The Fort Worth POA “Cops for Kids,” Fort Worth B-Cycle, and Girls Rock Fort Worth. Donating to charities and being involved with the community is an ongoing tradition at DDP.

“Serving the communities we operate in and helping those in need has always been an important part of DDP culture,” the company reaffirmed in a statement. In addition to the donations made by DDP, the company encourages fans and others to give, as even small donations to food banks, such as $30, can feed a family for a month.