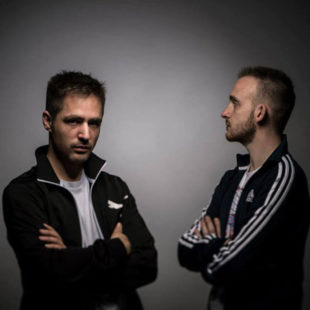 Ganja White Night is an electronic music band whose early influences are found at the roots of “Bass-Music”. During the past decade, the duo traveled many countries in Europe and beyond. The band takes a new creative direction tinted with hip-hop and more generally hybrid electronic music after the release of their fourth album “Addiction” in 2014.

They decided to break the fetters that connected them almost exclusively to dubstep and started using other forms of expression. It is therefore with their new album “Hybrid Distillery” that the group now has to make an impression by imposing its style in other genres of electronic music. This fifth album is not only another acoustic chapter, it is also about graphics. The draftsman/graffiti artist/director “Ebola – Delit2fuite” brings a whole new visual world mixed with, just like Ganja White Night, artistic originality and singularity never achieved until now.