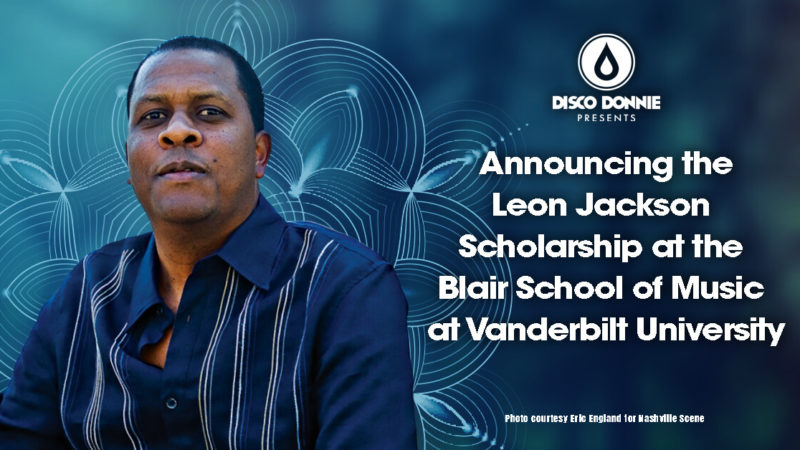 A new scholarship fund has been established at the Blair School of Music in honor of Leon Jackson, the late music and event promoter who introduced a generation of Nashvillians to electronic dance music.

DDP Worldwide Inc., better known as Disco Donnie Presents, has made a $100,000 charitable contribution to Vanderbilt to endow the Leon Jackson Scholarship. This need-based scholarship will go to deserving undergraduate students at Vanderbilt Blair, with preference given to students from groups that are underrepresented at the school.

Jackson, who died of colorectal cancer in 2016 at age 47, was a beloved figure in Nashville’s nightclub community for more than 20 years, promoting dance and electronica events at venues throughout the city, starting as a “street team” promoter at Nashville’s Hillwood High School and Belmont University, then through his own production company, Ultimo Presents, and later in partnership with large-scale event promoters Insomniac Events and Disco Donnie Presents.

“In the five years since Leon left us, we’ve reflected on the positive mark he left in this world,” said Donnie Estopinal, CEO of Disco Donnie Presents. “He was a mentor to many, and helped provide opportunities to upcoming talent in the Nashville music scene. DDP couldn’t think of a more fitting way to continue his legacy than through an endowed scholarship in the field he loved most.

“Leon knew the power of higher education and its ability to change lives, and he viewed the Vanderbilt University Blair School of Music as aspirational. But above all, he was an observer and listener. And he understood the importance of understanding diversity in life and its potential in business.”

“We are proud to honor the memory of Leon Jackson with this new scholarship,” said Lorenzo F. Candelaria, Dean of the Vanderbilt Blair School of Music. “In addition to foregrounding in perpetuity an important and dazzling entrepreneur in the music industry, the Leon Jackson Scholarship firmly underscores our commitment to inclusive excellence at Vanderbilt Blair.” Disco Donnie Presents is an award-winning and recognized leader in electronic dance music event production, founded by veteran promoter James “Disco” Donnie Estopinal. Since the company’s inception in 1994, DDP has sold more than 17 million tickets, producing more than 17,000 live events, arena shows and outdoor festivals in more than 100 markets around the world, including the U.S., Mexico, Canada, and Panama. Annually, DDP is responsible for organizing and promoting nearly 1,000 club events across the U.S. ranging from Portland, Columbus, Houston, Tampa, New Orleans, Dallas, and St. Louis to name only a few. DDP is also known for producing such major festivals such as The Day After, Ultimate Music Experience, Sun City Music Festival and, most recently, Ubbi Dubbi, Sunset Music Festival, Ember Shores and Freaky Deaky.