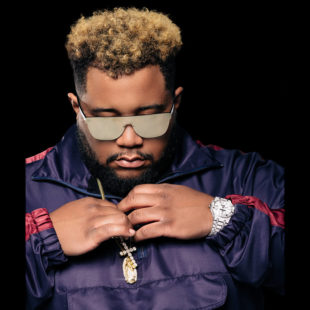 Whether he’s cooking up beats in the studio or igniting a festival crowd, Carnage does so with a whole lot of “Guala.”

“It’s a new word for swag,” explains the artist, producer, DJ, philanthropist, and RARE Festival founder. “It can stand for anything positive in your life. Throw some ‘Guala’ on whatever you do. For me, there are so many flavors in my soup. I’m black, and I make real rap music. I’m Latin, and I know dance music inside and out. I give both worlds a new voice and face. I proudly represent who I am.”

Carnage found his musical identity at a young age. Born in Washington, D.C. of Nicaraguan and African-American descent, he spent the first nine years of his life living in Guatemala before eventually attending high school in Frederick, MD. During this time, he began creating music on his laptop influenced by producers such as Kanye West, Ryan Leslie, Shawty Redd, Marvelous J, and more.

“My roots were always hip-hop,” he says. “I started networking with other people making music online and learning how to create my own tracks.”

Dropping out of high school in his junior year, he relocated to Los Angeles to go professional. Following his successful production on Theophilus London’s “Big Spender” [feat. A$AP Rocky], he expanded his creative palette and served up a groundbreaking take on Hardwell’s “Spaceman”–the “Carnage Festival Trap Remix.” Online, it exploded virally, cracked 1 million plays on YouTube at lightspeed, and sparked his “Festival Trap Music” Monday series.

“At first, everyone around me was like, ‘What the fuck are you doing? You need to be working on pop’,” he recalls. “I don’t listen to anybody though. I knew I could do something dope in EDM. Everybody put out remixes, but I wanted to do my own ‘Festival Trap’ style. I remixed big house songs, but I brought this underground trap energy.”

He straddled the line between electronic music and rap, while firmly holding on to his hip-hop core and impressively averaging over 3 million monthly Spotify streams. His 2015 full-length debut, Papi Gordo, bowed at #1 on Billboard’s Top Dance/Electronic Albums Chart and spawned the smash “I Like Tuh” [feat. iLoveMakonnen], which racked up 67 million Spotify streams, as well as “WDYW” [feat. Lil Uzi Vert, A$AP Ferg, & Rich The Kid], “Bricks” [feat. Migos], “Gordo” [feat. Rick Ross & araabMUZIK], and more. Along the way, he would be prominently featured by VICE, Complex, Pigeons & Planes, Billboard, Vibe, and more in between “smacking audiences with loud music” at festivals such as Coachella, Ultra, Tomorrowland, Lollapalooza and many others. Simultaneously, he founded his own RARE Festival “with all artists I fuck with,” as he puts it.
In the midst of this meteoric rise, he decided to give back in a big way by launching a “Learning Center” in Nicaragua.

“When I left Guatemala, I told my aunt who raised me that I would come back with a lot of bags filled with groceries for everybody someday,” he recalls. “I always wanted to give back, but one day I was like, ‘I’ve got to make it fucking happen.’ It wasn’t just about raising money. I went down there and built this learning center to try to make the world a better place. I think about how I grew up. I went from a third world country to the boonies of Maryland. I didn’t know English. I had to learn. I never lose sight of that.”

2017 kicked off with a bang. He teamed up with longtime friend and frequent collaborator G-Eazy for the Step Brothers EP. Its lead single, the appropriately titled “Guala” [feat. Thirty Rack], amassed over 5 million YouTube views and 1.5 million Spotify streams in under a week.

“We became really good friends over MySpace back in the day,” he goes on. “I loved his music. He’s an amazing producer. He actually taught me how to make my drums. I owe a lot to him. He respects my ear. We keep it honest with each other and will always be down.”

“When people hear me or see me, I want them to walk away in awe, minds blown, and fiending for more,” he leaves off. “I hope they’re addicted to Carnage.”